What happens to mahr after divorce?

We’re often asked what is haq mehr after a divorce.  This article explains more about mahr and divorce.

A landmark judgment could change UK law on the position of mahr or ‘bride-price’ payments.  Until now, the UK courts have dealt only with cases involving written mahr contracts. The case in question is the first involving an alleged oral contract to be heard in the UK courts.  If the court rules in the wife’s favour, the case will enable women to demand their mahr in full as is required by sharia law.

This article is not intended to replace legal advice or religious counsel.  If you have a question, please book your free 15 minute appointment with a member of our team.  Follow our #MyNikah by SKB Law series for more articles on the Nikah Nama, Gold, Prenuptials and more.

What is Mahr and the intention behind it?

Mahr is one of the most important parts of the Islamic marriage contract. It is a gift from the groom to the bride. It is intended to provide financial security for the wife in certain situations e.g. death of her spouse or divorce. The amount of the Mahr is not legally specified. A bride or her family may request money (nominal or higher amount), gold or anything else. It can be paid at the time of marriage (Mahr Mu’ajjal), or deferred to a later date (Mahr Muwajjal). The agreed amount is recorded in the Nikah-Nama. Under sharia law, the wife has the right to ask for her full mahr at any time during her marriage or upon its dissolution.

What happens if there is a dispute about Mahr during your divorce?

In a civil divorce, a couple will divide their assets. This could be through prior agreement, arbitration or a judge’s ruling during a court hearing. For Muslim couples, asset division raises some questions. Is Mahr considered an asset? If it is, can a judge decide on the division or payment of Mahr?  The answer isn’t straightforward.

Currently, under civil law, a woman is unable to demand her full mahr payment on divorce (as breach of contract). You must submit an application to the family court under section 25 of the Matrimonial Causes Act 1973 as part of the overall financial settlement.

Whilst there is no specific legislation under English law to settle disputes over the Mahr, the courts have addressed the issue.  They will look to ensure fairness and justice are upheld to both parties. In the leading case on wedding gifts, Samson v Samson [1960], the judge focussed on the ‘intention’ of the gift provider. Essentially, if there is no clear intention from the gift provider, then the conclusion should be formed that the gifts originating from wife’s side of the family should be hers and gifts from the husband’s side for him. On this basis, any gifts provided by the wife’s family should be returned to her and vice versa. More directly, in the case of Uddin and Choudhury [2009] the court considered the return of Mahr to the wife’s family and whether gifts that had been given to the wife by the husband’s family should be returned to his family. The judge found that gifts given by the husband’s family were absolute and non-returnable and furthermore, not to be deducted from the mahr. However, the mahr was still payable to the wife by the husband.

What can you do right now?

The court ruling could change things. This week’s ruling could establish a precedent on an issue that arises across the world. In July, a court in New Zealand ruled that a husband did not have to pay a $212,000 dowry to his ex-wife based on jurisdiction. If successful, cases involving mahr would be heard at UK county courts for breach of contract and at the family court as part of financial settlement.

Until then, if a dispute arises, try and reach an agreement between yourselves. If this is not possible, you may wish to resolve the issue with the support of a third party or a law firm.  Right now, consider the following:

This article is not intended to replace legal advice or religious counsel.  If you have a question, please book your free 15 minute appointment with a member of our team. SKB Law is a specialist family law firm with offices in Bradford and London. We advise and represent clients across England & Wales. Our services cover all areas of family law, including prenuptials and estate planning.
Follow our #MyNikah by SKB Law series for more articles on the Nikah Nama, Gold, Prenuptials and more.
← Prev Post Next Post →

In this episode, divorce lawyer Sarah talks to Inayah Sher about her divorce journey: from child bride to city champion.   This is the remarkable story of Inayah Sher. *Please be aware that this episode explores: forced marriage, child marriage, domestic abuse and...

END_OF_DOCUMENT_TOKEN_TO_BE_REPLACED 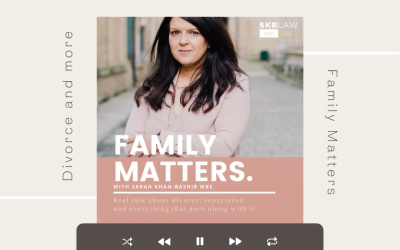 END_OF_DOCUMENT_TOKEN_TO_BE_REPLACED
We use cookies to ensure that we give you the best experience on our website. If you continue to use this site we will assume that you are happy with it.AcceptPrivacy policy